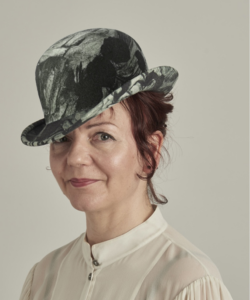 Born in Perth Scotland, Karen graduated from Duncan of Jordanstone College of Art in 1985 with a degree in jewellery design.

Her growing interest in millinery while studying for an MA at The Royal College of Art led her to work for Frederick Fox and Stephen Jones where she gained valuable knowledge and experience making couture hats.

After returning to Scotland in the early 1990`s she worked extensively for four years for Scottish Opera and Scottish Ballet making hats and headwear for countless new productions.

With a return to London she continued working freelance from her Clerkenwell studio for 17 years. Credits include Star Wars, “The Phantom Menace”, “The Fall”, “Master and Commander”, “The Golden Age”,” “Outlander “and “Game of Thrones”.

2014
The Art of Millinery: Headwear by Karen Shannon, The Gallery , Craft Central , London.

Karen is visiting tutor at Rose Bruford College of Theatre and Performance, Central School of Speech and Drama, London College of Fashion and Guildhall School of Music and Drama.